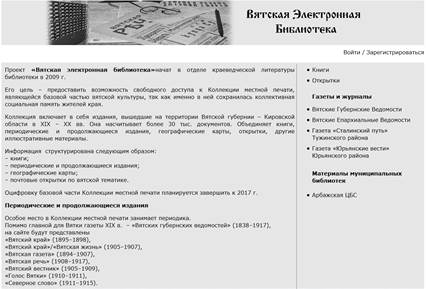 The project “Vyatka Electronic Library” was begun in the Local Studies Department of the Herzen Library in 2009.

Its aim is to grant free access to the local periodicals collection, which is a basic part of Vyatka culture, as the press keeps collective social memory the Vyatka residents.

The Collection consists of issues published in the Vyatka region since XIX-XX centuries. It numbers more than 30 000 documents. They are: books periodicals and sequels, geographical maps, card and etc.

Information is divided in such a way:
— Books;
— Periodicals and sequels;
— Post cards, devoted to Vyatka. 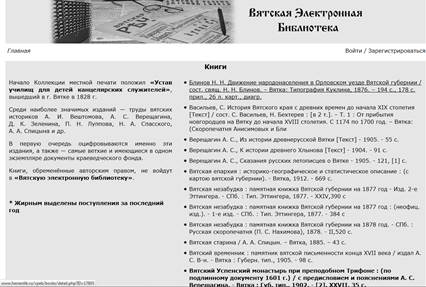 Local Studies Books
The document number one of this collection is ‘Charter of the specialized schools for the clerical stuff’s children ’ issued in 1828 in Vyatka. Among the most outstanding books are works of local historians A. I. Veshtomov, A. S. Vereshchagin, D. K. Zelenin, P. N. Luppov, N. A. Spassky, A. A. Spitzyn etc.
These issues are the first to be digitized. The single educations and dilapidated printings of the country study stock are also the first in waiting list. Copyright burden books will not be included in Vyatka Electronic Library.
Information about every publication contains a brief description and annotation, image of a cover or a title page, a link to file with full text or fragment in pdf format. 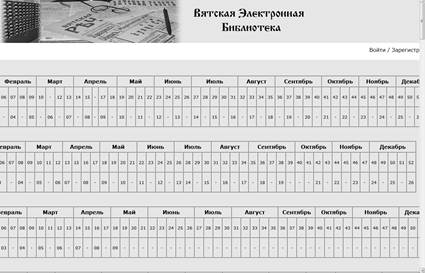 “The Vyatskiye Government Gazette” was the first regional newspaper (1838-1917). Till 1894 it was the only newspaper published in this county. That’s why it has undoubtly been the main source of information of the region till the beginning of the XX century. The issue was printed in two parts: official and informal.
The first part published orders and instructions of the Moscow and local authorities; transferring and awarding of high-ranking officials, information about tenders, selling estates, summons to the court. The second, informal part was devoted to historical, geographical, ethnographical and local lore study articles and items. Representatives of the local intelligence and political exiles contributed to the newspaper. Among them were A. I. Herzen, M. E. Saltykov-Shchedrin and others.
Since 1889 informal part had been issued as a separate newspaper under the title “The supplement to the VGG” (Vyatka Government Gazette). In 1905 “The Supplement” became an independent social-political newspaper “The Vyatskii bulletin”. The official part of VGG had been issued till March 1917.

We hope the classical works of the Vyatskiye bibliographers help you successfully orientate in score numbers of the newspaper publications.

The journal “The Vyatskiye Eparchial Gazette” (in abbreviated form-VEG) had been published in Vyatka in 1863-1918. Last year the journal “The Vyatskiye Eparchial Gazette” was released with the title “The Official news of the Vyatskaya Eparchy”. Firstly the publisher printed in the subtitle had been The Vyatskaya Spiritual Consistory and later- The Vyatskaya Spiritual Seminary. Originally the journal was issued twice a month, later it became daily. From august of 1917 the journal was published thrice a month. The informal part of the Vyatskiye Eparchial Gazette many fundamental articles devoted to the history of the Vyatka region and its religious life (the history of split and counter dissenting missions were of great interest) and outstanding personalities were published. The articles devoted to the Vyatka region foreigners- The Votyakees( people living on the territory of Udmurtia) and The Tcheremees( people living on the territory of Marry-El Republic) have the historical and ethnographical interest. The articles about the history of ROC (The Russian Orthodox Church), moreover the theological articles sometimes borrowed from other periodicals, sermons, biographical and bibliographical notes, didactic materials were also published. The following publications were taken as an appendix to the Vyatskiye Eparchial Gazette: “Extract from the eparchial missionary diary” by V. I. Myshkin (1895), “The description of Podrelskii split” by priest P. Zveitov (1908), “Vyatskaya eparchy historical geographical, statistical description” by N. V. Kabardin and V. I. Shabalin (1912), “The Vyatskii committee report of the Orthodox missionary society” (1893-1915), reports of local spiritual educational institutions, brotherhood, societies, candle works, church libraries; list of employees of spiritual Educational institutions of the Vyatskaya eparchy (1899-1907), records, journals and other official documents of clergy convention and committees, didactic and moralizing brochures and lists, including combined in sets:” The publication of Vyatskaya eparchy of Missionary Council” (1908-1914), “The Life Word” (1915), “Common List” (1915-1917).